The Passing of the Years 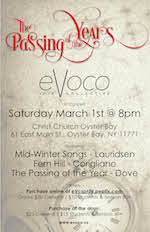 Our March 2014 program tied together the themes of beauty, death, and rejuvenation. Morten Lauridsen’s Mid-Winter Songs draw their texts from the poet Robert Graves, whose poems are both a lament and celebration of the desolate beauty of winter. In each movement, the narrators of each poem live and love in spite of “dying sun”, “falling snow”, and the “worm of death”. In the final movement, there is a plea to “Spare him a little longer, Crone” (time). This work, much like the season itself, is at times intense as a winter storm, and at other moments, tranquil as falling snow.

John Corigliano’s Fern Hill draws its text from Dylan Thomas’ poem recalling his visits to his family farm in Wales. The poem chronicles his idyllic and carefree youth, where he was “prince of the apple towns”, through young adulthood, when “it was all shining, it was Adam and maiden”, and finally to the realization that even in his youth, “Time held me green and dying, though I sang in my chains like the sea.”

Jonathan Dove’s The Passing of the Year draws its texts from several poets spanning over three centuries. Dove wrote this piece in memory of his mother, and the texts reference love, lust, death, and redemption. Like the other works in this program, The Passing of the Year grapples with love, loss, and rebirth and the intensity of the complex emotions that are a part of the human experience.