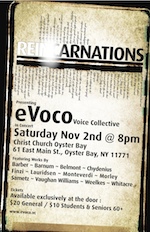 Our inaugural concert, “Reincarnations,” had nothing to do with the subject of reincarnation, really.  Rather, it took its title and inspiration from Samuel Barber’s three-movement work for unaccompanied choir, which in turn takes its title and inspiration from a collection of Gaelic poetry by Anthony Raftery (1779-1835), translated into English by James Stephens (1882-1950).  Actually, “translated” is much too strong a word to describe Stephens’ work.  Of his own admission, Stephens was more than a bit shaky with his Gaelic, and refused to call his own work a translation.  Rather, he dubbed his poems “reincarnations” of the spirit of Raftery’s verse.

The evening’s program was a three-part journey.  Each section’s theme arose from one of the three “reincarnated” poems: “Mary Hynes,” which celebrates the woman lauded as the most beautiful in all of Ireland; “Anthony O’Daly,“ which bemoans the death of an Irish activist unjustly accused–and consequently hanged–for an incident involving a gun; and “The Coolin” (an Irish term of endearment, literally “lock of curls”), in which we eavesdrop on an intimate moment of proposal from one young lover to another.  The spirit of these poems then serves as the inspiration for a varied and eclectic excursion through pieces spanning centuries, from the Renaissance to as recently as 2010. On second thought, perhaps it had everything to do with reincarnation.