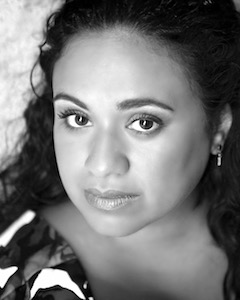 Andrea Arias-Martin, a native from Lynbrook, Long Island, is a graduate from the Master’s program at Manhattan School of Music, and received Bachelor’s from C.W. Post Campus of Long Island University. While at Manhattan, Andrea performed “Mother” in Griffelkin and “Anna Maurrant” in Street Scene. The New York Times stated, “As Anna Maurrant, Andrea Arias-Martin sings with a bright soprano and effectively conveys the character’s disillusionment and unhappiness.” Andrea was part of the Chautauqua Opera Studio Artist for the 2009 and 2010 seasons, covering the roles of “Foreign Woman” in The Consul and the title role in Norma. At Glimmerglass Opera, Andrea was an American Artist covering “Micaela” in Carmen and “Elaine” in John Musto’s Later the Same Evening. Andrea runs a music studio at her home in East Rockaway. She is the mother of Cadence and Aida while supporting her husband, head football coach at Long Beach, Scott Martin